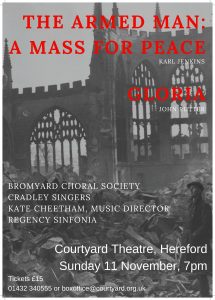 On Armistice Day 2018, Cradley Singers and Bromyard Choral Society sang Karl Jenkins’ The Armed Man and John Rutter’s Gloria in Hereford’s Courtyard Theatre.  This was a major undertaking for both choirs, and the first time they had put on a concert together.  Both pieces were accompanied by a brass and percussion ensemble as well as solo cello and piccolo, and the resulting magnificent sound played to a capacity audience.  All the performers felt they had given of their best, and the audience were most appreciative of the evening’s musical entertainment.  Some audience feedback below :

“What a triumph!  It was an outstanding performance, with an appropriate accoustic in the Theatre – complete dead silence at the ends of outbursts, with an excellent Prayer-caller, and everyone working as a team.  The timing was so poignant for me, as my birth was registered at Bromyard, as were those of my great-uncle (killed, Gallipoli), (grandfather, M.C. 1918), and father (wounded ’43, died ’53)”

“For me the highlight was the Armed Man, though Rutter’s Gloria was beautiful too.  The piece was expertly performed: every word was clear, even up in the balcony, and emotional impact for me was cosequently profound.  The conductor, Kate Cheetham clearly had the trust and respect of every member of the choir and deservedly so.  The resulting performance was a triumph”